J.M. Bush is the author of the urban fantasy novel, Storm in Shanghai. He began writing fiction in high school, but based on the negative reaction and mocking comments from an adult to one of his stories, J.M. lost confidence in his ability to write. He did not begin crafting new worlds again until March of 2015 – almost twenty years after he quit believing in himself. J.M. began writing online articles about traveling for the magazine Thursday Review. After spending four years living and working in Shanghai, China from 2011-2015, J.M. moved to Penang, Malaysia with his wife and two sons, where they currently reside. He still writes articles for the magazine, while also continuing to write science fiction and fantasy stories. 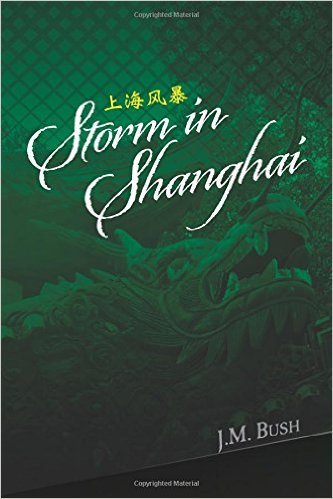 Matthew Toffolo: What is the general theme and tone of your novel?

J.M. Bush: The general theme of my novel is the fight against evil, and yet in that fight you may be called upon to do the unthinkable to achieve this goal. To save the lives of your family and friends, and to stop the murder of countless innocent people, what should the hero be willing to do in order to accomplish this? The book also deals with the idea of how someone becomes evil. How does a good person go bad? Storm in Shanghai is told through first person POV present tense in some chapters , first person POV past tense of the same character in other chapters, and finally in third person past tense of some other characters in other chapters. The tone of each is different, but ranges from witty and happy to angry and scared.

MT: Why should people buy your novel?

JMB: People should buy my book if they want a new take on magic set in the real world, an engaging mystery where cops seek the identity of a mysterious killer to put a stop to their murderous rampage, lots of action and spell fighting, and fantastic characters like a punk rock Chinese girl who shoots fire dragons from her hands at her enemies, a 300 year old Scottish man who drinks like a fish and sucks at magic, and a mysterious figure clad in black that can do things with magic no one has ever seen before.

MT: How would you describe your novels in just two words?

MT: What movie have you seen the most in your life?

MT: Was being a novel writer something you’ve always dreamed of doing?

JMB: I used to like writing as a kid and was turned off after being mocked by an adult. It wasn’t until a year ago, in March of 2015 that I decided to take on writing novels. I have since finished three, and Storm in Shanghai is my first to be published. If I knew back then what I know now (cliche, I know) I would never have given up writing. It is such a relief to put words on paper and see them enjoyed by other people. But even more so than that, the feeling of pride I get when I read my own stuff is the real reward; to know that I am actually good at this and no one will ever make me doubt that again, no matter what they say.

MT: Do you have an all-time favorite novel?

JMB: Have you read a novel more than once? I am terrible at picking favorites! The Chronicles of Narnia series by C.S. Lewis had a huge impact on me as a kid. I read the entire series once a year for many, many years in a row. I eventually stopped, and I don’t even know why. But I have two Narnia tattoos, both from The Voyage of the Dawn Treader, so I guess it’s safe to say that is my favorite novel. But I read most novels I love more than once. The Icewind Dale Trilogy by R.A. Salvatore comes to mind. I’ve read those three books sooooo many times. They are perfect. I also love the rest of the Companions Saga, and all the Drizzt stuff. Oh, and every book Michael Crichton wrote would be on the list of books I’ve read over and over. I just love the way he wrote about science. He researched the hell out of his subject and ended up making me believe it was true.

MT: What motivates you to write?

JMB: There is a movie constantly playing in my mind. It changes all the time, but whatever is happening on that mental silver screen feels even better once I put it on paper and form it into something that makes sense. The motivation for me is finding out what happens in that movie in my head. Because it is always changing, I never get to see the end unless I write it!

MT: What artist would you love to have dinner with?

JMB: Oh dear me. This is a tough one. At the moment, I would probably say R.A. Salvatore so we could hopefully play some D&D after dinner.

MT: Apart from writing, what else are you passionate about?

JMB: My family is everything to me. I have an incredible wife and two crazy boys. I modeled the character Kelly, the wife of the MC in my book, on my wife Merissa. And I used her name for another character, I just changed it slightly. My boys also inspired the sons of the MC in my book, as I named them after Star Wars characters. My oldest is named Lucas and my youngest’s middle name is Han. So, I guess I’m pretty passionate about Star Wars, too! In addition to that, I love playing music. I have been in several punk rock bands over the years, most recently in China, where we played all the time and in many places throughout the Middle Kingdom. I love to sing and play bass, but I find writing music so much more difficult than writing a 100k word novel!

MT: Any advice or tips you’d like to pass on to other writers?

JMB: Yes, for sure. First, don’t let what anyone else tells you make you feel like a bad writer. Taking constructive criticism is one thing; beta readers can offer amazing insight to how your book comes across to different people, and an editor is essential for creating a sharp and focused book. Take constructive criticism to heart and use it to better your writing. But people that just spew hate and filth about your writing? Just brush those people off. Their opinions do not matter and should not affect you. Have faith in your ability, and believe in your ideas. YOUR IDEAS ARE AWESOME. Don’t be discouraged by rejection letters. Don’t worry about whether or not your book will be a best seller. Just write the story you want to tell, and the people that want to read it will eventually get to do so.

Interviewer Matthew Toffolo is currently the CEO of the WILDsound FEEDBACK Film & Writing Festival. The festival that showcases 10-20 screenplay and story readings performed by professional actors every month. And the FEEDBACK Monthly Festival held in downtown Toronto on the last Thursday of every single month. Go to http://www.wildsound.ca for more information and to submit your work to the festival.