Tim Walker was born in Hong Kong, grew up in Liverpool and studied in South Wales and Bristol, before moving to London where he worked in newspaper publishing for 10 years. By the mid-1990s he was ready for a new challenge and went to Zambia as a voluntary worker, running training courses in educational book publishing.  He stayed on and set up his own publishing and marketing company, before returning to Maidenhead in Berkshire in 2009. He currently lives in Datchet, close to Windsor, beside the river Thames; the inspiration for his first book, a book of short stories, Thames Valley Tales.  He has recently completed and published his first novel, Devil Gate Dawn, a near-future thriller set in the UK and USA in the year 2026.  He is currently writing an historical fiction series based in England between AD410- 500, A Light in the Dark Ages, and has published the first part, Abandoned! 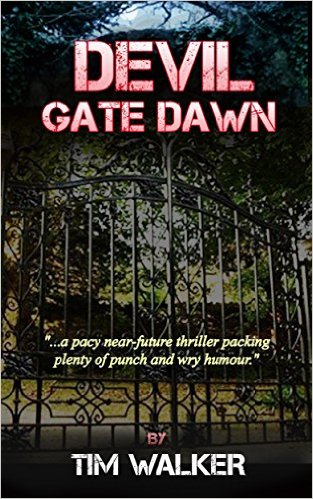 Matthew Toffolo: What is the general theme and tone of your novels?

Tim Walker: My new novel, Devil Gate Dawn, is a near-future thriller that grew out of a weekly fiction blog called ‘Life of George’. It is a story that evolved over a nine month period and was a vehicle for my observations and gripes on social and political issues. By setting it ten years in the future, it has allowed me to project my concerns forward, and to indulge in a little fantasy. In the USA I have Trump as President, defending his record, and his wall; whilst in the UK voter apathy has collapsed the democratic system and King Charles III has been called on to head an interim administration.

MT: Why should people buy your novels?

TW: It’s a highly entertaining and thought-provoking read at a nice low price!

MT: How would you describe your novels in just two words?

MT: What movie have you seen the most in your life?

MT: Was being a novel writer something you’ve always dreamed of doing?

TW: I always wanted to set up and run my own newspaper, and grabbed the opportunity to do this in the year 2000, after a stint as a voluntary worker in Zambia. I thoroughly enjoyed being editor, features writer, advertising manager, distribution organiser and general dogs body on my fortnightly newspaper ‘Business & Leisure News’ – Zambia’s first full colour newspaper! If you get a chance to live your dream, then grab it!

I have only recently tried my hand at creative writing, graduating from short stories, via historical fiction, to my novel whilst recovering at home from skin cancer treatment.

MT: Do you have an all-time favorite novel? Have you read a novel more than once?

TW: I always loved ‘The Power and the Glory’ by Graham Greene. I must have re-read passages many times, and probably been influenced by Greene’s powerful story telling.

MT: What motivates you to write?

TW: I love reading short stories and novels, a habit developed early in life. I also love film and got the chance to be involved in film making whilst a student. I have always been intrigued by the possibility of writing my own novels and writing my own screenplays. Now I’ve started, I fully intend to make the time to keep my forward momentum going.

MT: What artist would you love to have dinner with?

TW: I would like to pick Martin Scorsese’s brain about what makes a killer script. I feel my fiction has a visual quality and I’m fascinated by the process of transforming the written word to the screen.

MT: Apart from writing, what else are you passionate about?

TW: My daughter’s education and development, movies, television drama, history, the environment and sport, particularly football (I grew up in Liverpool and support them) and rugby (I used to be a player and administrator).

MT: Any advice or tips you’d like to pass on to other writers?

TW: Everyone has a story in them. Start by writing notes about yourself, your life and interests, and character portraits of people you know. Hopefully, you will be pleasantly surprised at how clever you are, and be motivated to write a story, or your memoirs. Take advice from other writers, but ultimately keep faith with your own vision of the world. It’s YOUR story.

Interviewer Matthew Toffolo is currently the CEO of the WILDsound FEEDBACK Film & Writing Festival. The festival that showcases 10-20 screenplay and story readings performed by professional actors every month. And the FEEDBACK Monthly Festival held in downtown Toronto on the last Thursday of every single month. Go to http://www.wildsound.ca for more information and to submit your work to the festival.